Watch Duvall Hecht and Jimmy Fifer winning their heat and final race in the 1956 Melbourne Olympics below. Duvall shares some thoughts on his performance in this gold medal victory:

Here is a remarkably well restored copy of a film George [Pocock] took in 1956 of our pair in Melbourne. It shows a number of different styles, and you can compare their effectiveness by the results.

Fifer and I were generally three to five beats lower than the competition. It isn’t how many strokes you take, but how effective they are. What made our stroke effective? Couple of things …

First, we put everything we could into each stroke … lots of effort, sure, but no more than anyone else. The difference is that technically, with oars close to the water and with the roll-up being the final part of the extension for more reach, we got a lot more water to work with.

I can’t emphasize too strongly how important “with oars close to the water and with the roll-up being the final part of the extension for more reach” is to maximizing a crew’s effectiveness. You can see how carefully we approached the catch. The connection with the water was at the speed we were moving, and when the oar took its hold on the water, we began the acceleration. Absolutely no lost motion or wasted effort … no cavitation. Nothing interfered with the run of the boat … no vertical motion whatsoever.

We also carried the work as far as we could into the bow. Something in physics about that, about power applied over distance, in this case distance being the arc of the oar through the water.

We let the boat get all the run it could out of each stroke. By rowing two or three beats higher, the competition cut off the run. But first you have to boost the effective power in the water.

Everyone is equally fatigued at the end of a race, so it isn’t just effort. It’s effort effectively applied.

You can see the Russian pair, our chief competitor, and how short they are in the water. They approach the catch with their oars high off the water and then smack the catch hard with their oars … to my eye, they miss a ton of water, and their only recourse is to row at a higher rate, which compounds their problem.” 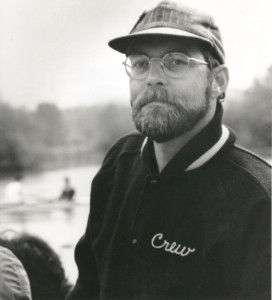 Ernst graduated from UC Irvine in 1967 and later earned a master’s degree in sports administration from the University of Washington in 1979. He was inducted into Irvine’s athletic hall of fame in 1984 and the national rowing Hall of Fame in 1994. A 1963 graduate of Costa Mesa (Calif.) High School, Ernst attended Orange Coast College for two years, where he played center on the 1963 national championship junior college football team and competed in swimming and water polo. He transferred to UC Irvine and continued his swimming and water polo career. Ernst was also a member of Irvine’s rowing program in 1966 and 1967 and was team captain as a senior. Ernst resides in Edmonds, Wash. with his wife and his two children. [Text Source]

Bradley Lewis rowed at UC Irvine. He was a member of the 1980 US Olympic team that could not compete because of the boycott. He competed at the World Championships in 1977 in the coxed four, placing ninth, and in 1983 in the coxed pair, finishing sixth. Lewis was featured in the David Halberstam book The Amateurs about the efforts by several American rowers to train for and make the 1984 US Olympic team. The book had a happy ending when Lewis and his partner, [Paul Enquist], won gold at Los Angeles in the double sculls.

Lewis later became an independent filmmaker. In 2000 he produced a documentary, A Fine Balance, about the US eight that entered the Sydney Olympics as favorites after winning three consecutive world titles, but struggled to a fifth-place finish. He made his debut as an independent filmmaker at the 2002 Newport Beach Film Festival, and has worked on several HBO movie projects. [Text Source] 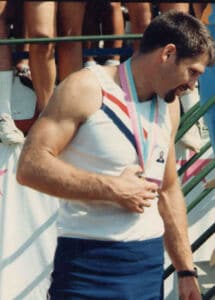 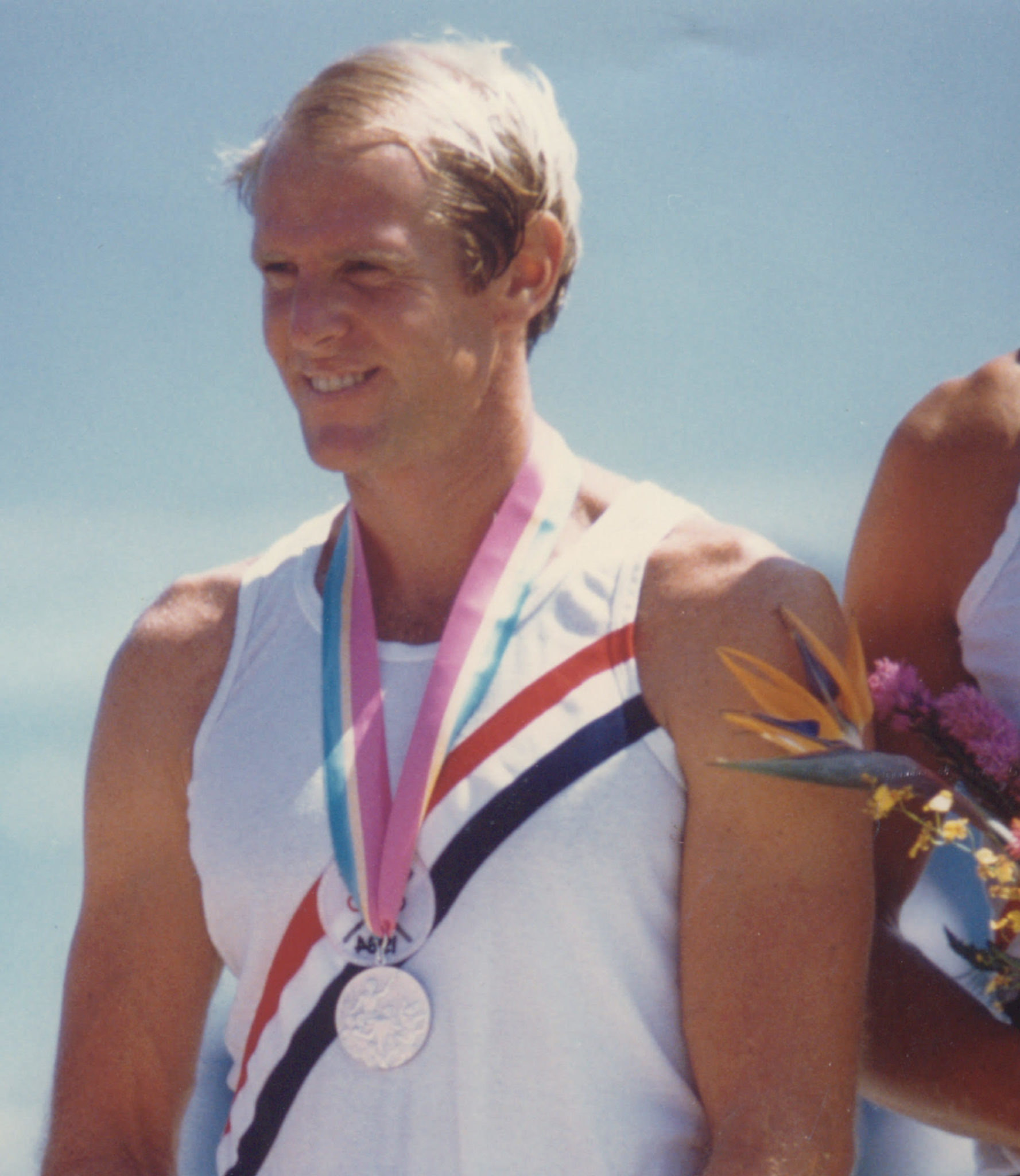 Bruce Ibbetson, Class of 1975, was a walk-on freshman at UCI in the Fall, 1971, achieving a BS in Biology.
He rowed the 2 seat in the Freshman 8 under coach Stu Gibson, then the 2 seat in the JV 8 as a sophomore, under head coach Bob Ernst.
In his junior year, after recovering from a dislocated knee, Bruce stroked the Varsity 8 beating Cal Berkeley and narrowly losing to Washington in the Western Sprint Championships. That boat received the Rusty Callow, National Award. In his senior year, Bob Ernst had moved to Washington as the new Freshman coach, and the UCI Varsity 8 slipped to 4th in Western Sprints.
After graduating, Bruce moved to Seattle, WA to train under Bob Ernst. After just missing the 1976 Olympic Team, Bruce was encouraged to continue training, and stroked the US 8 at the 1977 World Rowing Championships in Amsterdam. Rowing most summers out of the Penn boathouse, under coach Ted Nash, the way forward was filled with miles of small boat training, mostly in the pair w/o cox. Multiple National Championships followed in pairs, fours, and eights, along with racing in the US Eight or pair at the World Rowing Championships in 77, 78, & 79. Coach Harry Parker chose Bruce to stroke the 1980 Olympic Eight, which lost only to East Germany in pre-Olympic racing in Europe, but was denied the opportunity to race at the Moscow Olympic Games in 1980 due to the Carter Administration Boycott of the 1980 Games. Back at school, Bruce earned his combined, MBA & MPA from UCI in 1982, and then raced in the US Eight in the 1983 World Championships. His racing career ended with a silver medal, stroking the US Eight at the 1984 Olympic Games in Los Angeles. The racing results were mostly good, but the journey and lifelong friendships remain irreplaceable.

Greg Springer owns and runs a cattle ranch in a remote town in south Texas, several hours away from the nearest body of water. “What does being an Olympian mean to me? Nothing; I don’t talk about it, most people are very disappointed when they hear me talk about the Olympics.” Why? Springer is saddened with what he calls the slow prostitution of the Olympic movement. He recalls rowing and coaching legend Ted Nash recounting the splendor of the Olympics as “being the most beautiful athletic and social event currently known to man, where people from all over the world come together and compete under equal conditions and all are respected and all are welcome” Springer compares that to what he says in the commercialized, drug-tainted event the Olympics has become in the last 30 years or so is a dismay. 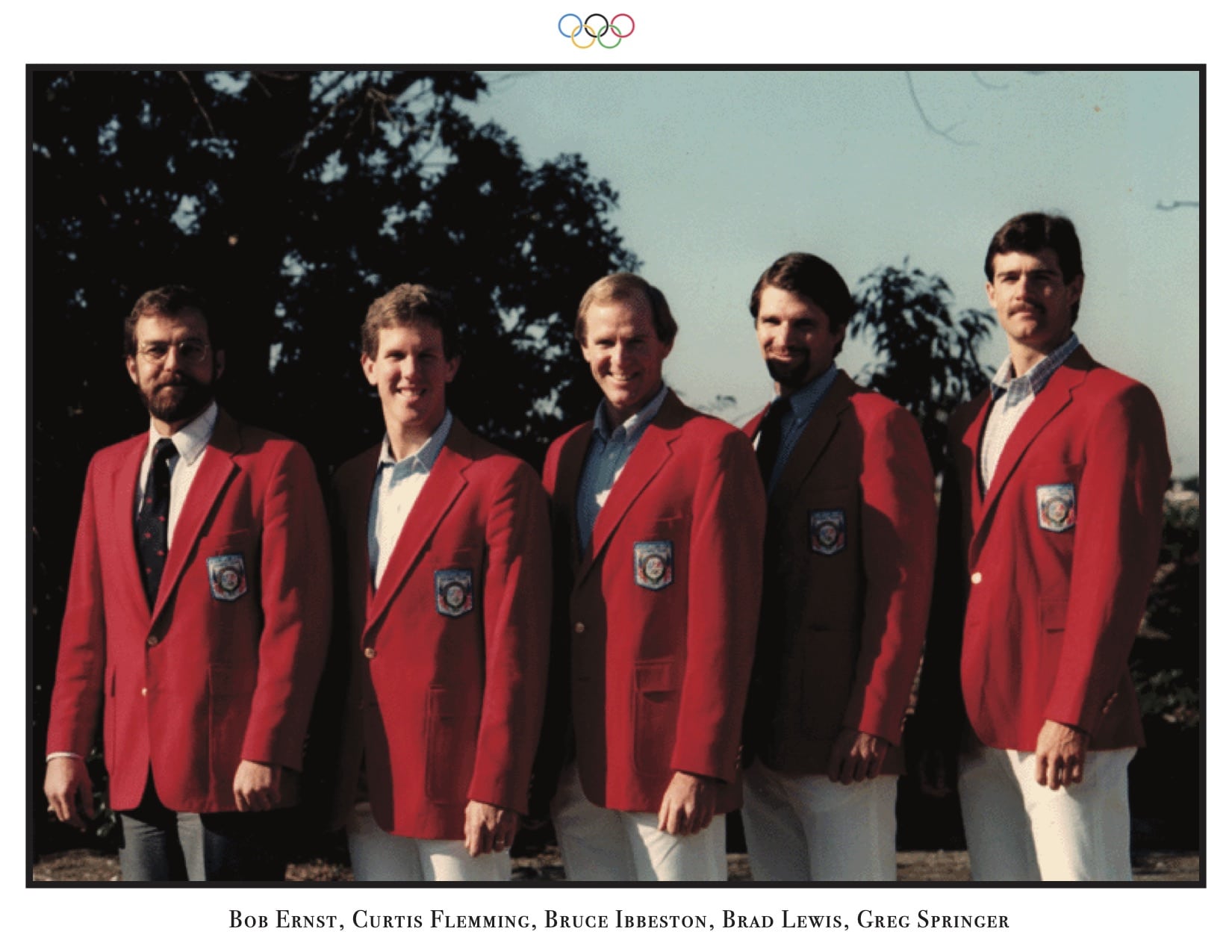 Still despite the corruption and politics that he feels have marred the Olympics as an institution, Springer looks back on his days as an elite athlete with a mixture of longing and contentment. He sees his silver medal as a result of his crew showing up and doing their job. “Going into the [Olympic] final we knew the British had beaten us once, and we were confident we could beat everyone else,” he recalls. “We rowed right at the level of our crew, it’s not necessarily laudable, and it’s not negative, it just is” He adds: “had we won gold, I would of been ecstatic because we would have exceeded our performance, if we’d gotten a bronze I would have been extremely disappointed. As it was, we showed up and did our job.”

This sort of stoic pragmatism is the way Springer looks at his entire athletic career. “I didn’t compete against other people or other countries I competed against myself,” he says. “It was an avenue that allowed me to push my own boundaries. Sometimes the gauge of my performance was the result of my competition.

Nevertheless, he says, he never measured himself as an athlete by his wins and losses. “There were times when I was blown away on the water where I was ecstatic with my performance, and times where I won and was very disappointed with my race. It’s not the competition and it’s not the politics, being in a situation where the sum focus of your attention is on yourself as an athlete,” says Springer, “for me that is what it’s all about.”

Springer sees being an Olympican as something almost anyone has the potential to be able to do. “The one thing anyone who is world class has is the ability to focus, not necessarily extraordinary talent,” he says. “It’s not that some people can and most can’t. It’s that some will and most won’t” 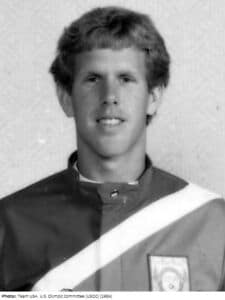 Curtis Fleming graduated from UC Irvine in 1978 with a degree in economics. He competed at the 1984 Olympics in quad sculls, placing seventh. Fleming won a silver medal at the 1983 Pan American games in double sculls. He worked in commercial real estate with Grubb & Ellis, a company which was later taken over by BGC Properties. [Text Source]